Some texts as guiding principles in today's crisis 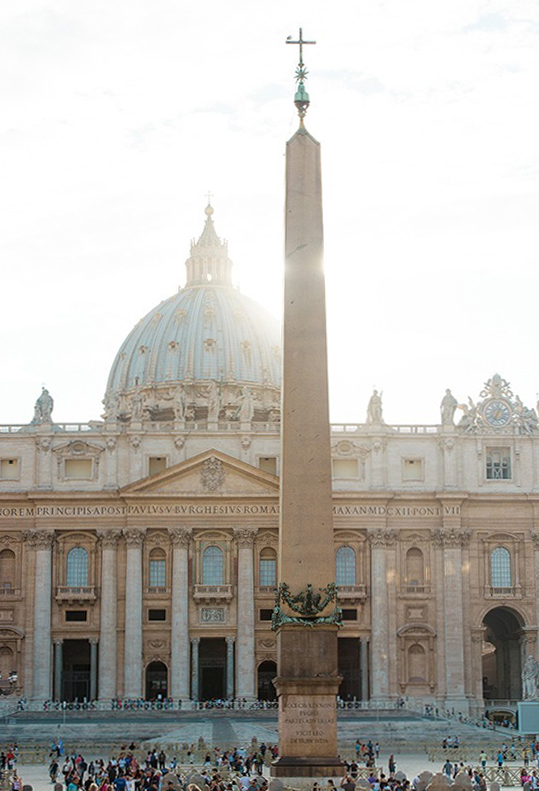 1. The Catholic Church is divine

Moreover, in order that we may perform satisfactorily the duty of embracing the true faith and of continuously persevering in it, God, through His only-begotten Son, has instituted the Church and provided it with clear signs of His institution, so that it can be recognized by all as the guardian and teacher of the revealed word. (Vatican I, Dz 1793).

2. The Catholic Church is the unique Ark of Salvation

The Catholic Church firmly believes, professes, and proclaims that those not living within Her, not only pagans, but also Jews, heretics, and schismatics, cannot become participants in eternal life but will depart 'into everlasting fire which was prepared for the devil and his angels' (Mt. 25:41), unless before the end of life the same have been added to the flock... (Council of Florence, Dz 714).

3. The Catholic Church is visible and indefectible

Moreover, what the Chief of pastors and the Great Pastor of sheep, the Lord Jesus, established in the blessed Apostle Peter for the perpetual salvation and perennial good of the Church, this by the same Author must endure always in the Church which was founded upon a rock and will endure firm until the end of the ages. (Vatican I, Dz 1824 [cf. Dz 1793 above]).

The one Church of Christ is visible to all and will remain, according to the Will of its Author, exactly the same as He instituted it. (Pius XI, Mortalium Animos, §15).

4.  The Church is founded upon Peter and his successors forever

If anyone then says that it is not from the institution of Christ the Lord Himself or by divine right that the blessed Peter has perpetual successors in the primacy over the universal Church...let him be anathema....

If anyone thus speaks, that the Roman Pontiff has only the office of inspection or direction but not the full and supreme power of jurisdiction over the universal Church, not only in things which pertain to faith and morals, but also in those which pertain to the discipline and government of the Church spread over the whole world...let him be anathema. (Vatican I, Dz 1825, 1831).

But it is opposed to the truth and in evident contradiction with the divine constitution of the Church to hold that, while each bishop is individually bound to obey the authority of the Roman Pontiffs, taken collectively the bishops are not so bound. (Leo XIII, Satis Cognitum).

5. The pope has power only "unto edification and not unto destruction" (II Cor 13:10) of Christ's Church

For, the Holy Spirit was not promised to the successors of Peter that by His revelation they might disclose new doctrine, but that by His help they might guard sacredly the revelation transmitted through the apostles and the deposit of faith, and might faithfully set it forth. (Vatican I, Dz 1836).

And for these sacraments instituted by Christ the Lord, in the course of the ages the Church has not and could not substitute other sacraments, since, as the Council of Trent teaches, the seven sacraments of the New Law have all been instituted by Jesus Christ our Lord and the Church has no power over the “substance of the sacraments,” that is, over those things which, with the sources of divine revelation as witnesses, Christ the Lord Himself decreed to be preserved in a sacramental sign... (Pius XII, Sacramentum Ordinis, Dz 2301).

It is well known unto all men...with what great care and pastoral vigilance our predecessors the Roman Pontiffs have discharged the office entrusted by Christ Our Lord to them in the person of the most blessed Peter, Prince of the Apostles, have unremittingly discharged the duty of feeding the lambs and the sheep, and have diligently nourished the Lord’s entire flock with the words of faith, imbued it with salutary doctrine, and guarded it from poisoned pastures. And those our predecessors, who were the assertors and champions of the august Catholic religion, of truth and justice, being as they were chiefly solicitous for the salvation of souls, held nothing to be of so great importance as the duty of exposing and condemning, in their most wise Letters and Constitutions, all heresies and errors which are hostile to moral honesty and to the eternal salvation of mankind... (Pius IX, Quanta Cura §1).

Revelation, constituting the object of Catholic faith, was not completed with the apostles (Condemned by St. Pius X, Lamentabili, Dz 2021).

Further, by divine and Catholic faith, all those things must be believed which are contained in the written word of God and in Tradition, and which are proposed by the Church, either in a solemn pronouncement or in her ordinary and universal teaching power, to be believed as divinely revealed....

Hence, also, that understanding of its sacred dogmas must be perpetually retained, which Holy Mother Church has once declared; and there must never be recession from that meaning under the specious name of a deeper understanding... definitions of the Roman Pontiff from himself, but not from the consensus of the Church, are unalterable (Vatican I, Dz 1792; 1800; 1839).

7. Protestants and other non-Catholics do not have the Faith

Likewise the liberty of those who are in authority does not consist in the power to lay unreasonable and capricious commands upon their subjects... but the binding force of human laws is in this, that they are to be regarded as applications of the eternal law, and incapable of sanctioning anything which is not contained in the eternal law, as in the principle of all law (Leo XIII, Libertas §10).

9. Bad laws are not laws

If, then, by any one in authority, something be sanctioned out of conformity with the principles of right reason, and consequently hurtful to the commonwealth, such an enactment can have no binding force of law, as being no rule of justice, but certain to lead men away from that good which is the very end of civil society.... But where the power to command is wanting, or where a law is enacted contrary to reason, or to the eternal law, or to some ordinance of God, obedience is unlawful, lest, while obeying man, we become disobedient to God (Leo XIII, Libertas §10, 13).

10. In certain circumstances ecclesiastical laws do not oblige

11. The Mass is not essentially a meal

If anyone says that in the Mass a true and real sacrifice is not offered to God, or that the act of offering is nothing else than Christ being given to us to eat, let him be anathema. (Council of Trent, Dz 948.).

12. THE MASS IS THE RE-ENACTMENT OF CALVARY (and not just a narrative of the Last Supper, which was itself but a pre-enactment of Calvary)

He, therefore, our God and Lord, though He was about to offer Himself once to God the Father upon the altar of the Cross...nevertheless, that His sacerdotal office might not come to an end with His death, at the Last Supper, on the night He was betrayed, so that He might leave to His beloved spouse the Church a visible sacrifice (as the nature of man demands), whereby that bloody sacrifice once to be completed on the Cross might be represented, and the memory of it remain even to the end of the world... offered to God the Father His own body and blood under the species of bread and wine.... (Council of Trent, Dz 950).

13. The Mass is not a community gathering

If anyone says that Masses in which the priest alone communicates sacramentally, are illicit and are therefore to be abrogated, let him be anathema. (Council of Trent, Dz 955, cf., principle 14)

14. The prayers of the Mass are not directed to the people but to God

If anyone says that the rite of the Roman Church, according to which a part of the canon and the words of consecration are pronounced in a low tone, is to be condemned..., let him be anathema. (Council of Trent, Dz 956)

15. Holy Communion under both species is not necessary for the laity

If anyone denies that the whole Christ is contained in the venerable sacrament of the Eucharist under each species and under every part of each species, when the separation has been made, let him be anathema. (Council of Trent, Dz 885)

If anyone says that the holy Catholic Church has not been influenced by just causes and reasons to give communion under the form of bread only to laymen and even to clerics when not consecrating, or that she has erred in this, let him be anathema. (Council of Trent, Dz 935)

16. The Blessed Sacrament is Our Lord and must be worshipped

If anyone says that in the holy sacrament of the Eucharist the only-begotten Son of God is not to be adored even outwardly with the worship of latria... let him be anathema. (Council of Trent, Dz 888).

17. The Blessed Sacrament contains the whole Christ under the species of bread and wine

If anyone denies that in the sacrament of the most holy Eucharist there are truly, really, and substantially contained the body and blood together with the soul and divinity of our Lord Jesus Christ, and therefore the whole Christ, but shall say that He is in it as by a sign or figure, or force, let him be anathema. (Council of Trent, Dz 883).

18. The Catholic priesthood is of divine origin

If anyone says that by these words: “Do this for a commemoration of me,” (Lk. 22:19; I Cor. 11:24), Christ did not make the Apostles priests, or did not ordain that they and other priests might offer His own body and blood: let him be anathema. (Council of Trent, Dz 949).

19. The traditional Roman Mass is still in force in virtue of Quo Primum

By these present (ordinances) and by virtue of Our Apostolic Authority, We give and grant in perpetuity that for the singing or reading of Mass in any church whatsoever this Missal may be followed absolutely, without any scruple of conscience or fear of incurring any penalty, judgment or censure, and may be freely and lawfully used... We likewise order and declare that no one whosoever shall be forced or coerced into altering this Missal; and that this present Constitution can never be revoked or modified, but shall forever remain valid and have the force of law... (St. Pius V, Quo Primum).

And because the Novus Ordo Missae is not to be regarded as an option open to faithful Catholics:

1. The accompanying Critical Study is the work of a select group of bishops, theologians, liturgists and pastors of souls. Despite its brevity, the study shows quite clearly that the Novus Ordo Missae - considering the new elements susceptible to widely different interpretations which are implied or taken for granted - represents, both as a whole and in its details, a striking departure from the Catholic theology of the Mass as it was formulated in Session 22 of the Council of Trent. The “canons” of the rite definitively fixed at that time erected an insurmountable barrier against any heresy which might attack the integrity of the Mystery. (Cardinals Ottaviani and Bacci, Short Critical Study of the New Order of Mass)

To abandon a liturgical tradition which for four centuries stood as a sign and pledge of unity in worship, and to replace it with another liturgy which, due to the countless liberties it implicitly authorizes, cannot but be a sign of division - a liturgy which teems with insinuations or manifest errors against the integrity of the Catholic Faith - is, we feel bound in conscience to proclaim, an incalculable error. (Cardinals Ottaviani and Bacci, Short Critical Study of the New Order of Mass)